I thought I would share with members of the Hermanus Bird Club some photographs Jill Eckstein took when she, her husband, Paul, and I – all Club members- went birding at Strandfontein last weekend. 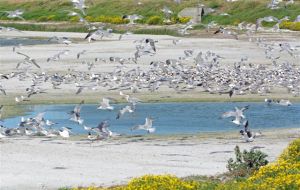 We passed the picnic sites in Strandfontein where those of us who had been on the HBC outing last month had found the rare Rufous-tailed Scrub-robin (Rooistert-wipstert).

As there was not a car or another person in sight, we drove on to the conservation area.

It wasn’t long before we had notched up a fair list of birds, including the Swift Tern (Geelbek-sterretjie) in flocks on the sandy shores in a relatively sheltered area.

That is where Jill took the picture of them taking off in a mass flight into the blue. What a tremendous sight it was.  The pic almost looks like a water-colour painting.

We watched the Grey Heron (Bloureier) stalking along the shoreline…