BirdLife South Africa is pleased to announce that the Bird of the Year in 2021 will be the Cape Rockjumper Chaetops frenatus. 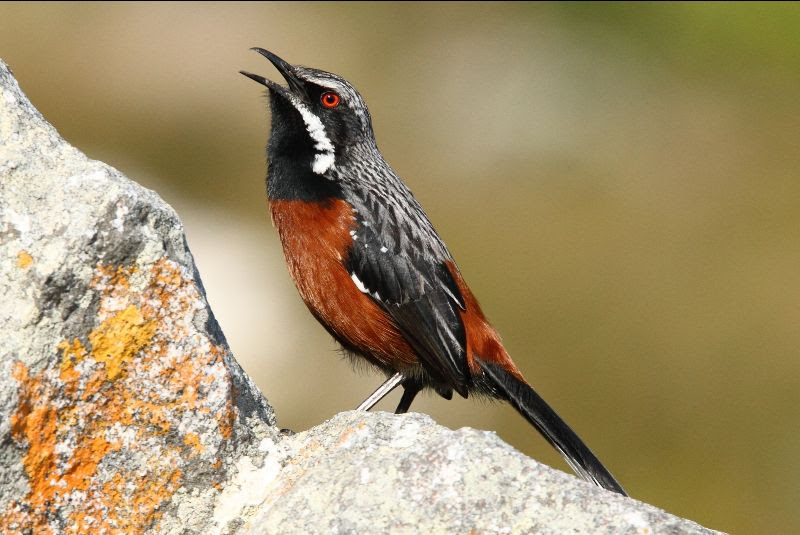 BirdLife South Africa chose this species as ‘Bird of the Year’ as it is an ambassador for the Fynbos biome: the unique plant kingdom found only in South Africa. There are seven other bird species found here and nowhere else on earth: Cape Sugarbird, Orange-breasted Sunbird, Protea Canary, Cape Siskin, Victorin’s Warbler, Agulhas Long-billed Lark and Hottentot Buttonquail. The Fynbos extends from the northern Cederberg through the Cape Fold Mountains, to Port Elizabeth, with fragments as far as Makhanda/Grahamstown. The Fynbos is generally well protected within the CapeNature reserves of the Western Cape, but there are major concerns regarding the spread of alien tree species like pines and wattles, as well as increased fire frequencies as a result of climate change.

Increased fire frequency creates habitat that is favourable to Cape Rockjumpers by opening up the habitat for this species, as it likes to forage by hopping around on the ground. This is a reason that it is mostly associated with high alpine areas and mountainous terrain within the Fynbos, where vegetation is naturally sparse and low. Ironically though, a range of studies have indicated that it is vulnerable to climate change rather than benefitting from it, with decreases in range and reporting rate according to the Southern African Bird Atlas Project.

This vulnerability appears to be due to a combination of factors. Firstly, they have a physiology that relies on water-loss to keep cool, an odd strategy given the bird lives in a region that experiences dry summers. Juveniles and chicks seem particularly vulnerable to heat stress, while adults simply stop foraging when it gets too warm. Range modelling indicates the species is restricted to cooler regions of the Fynbos (notably at higher altitude). Furthermore, there is evidence that the nests, made on the ground, are becoming especially vulnerable to predators such as Boomslang.

The Cape Rockjumper is thus the first South African species to gain a threatened conservation status (Near Threatened according to the IUCN red list) due to the direct and indirect effects of climate change.

The Cape Rockjumper therefore also serves as an ambassador to a host of other animal species that are similarly restricted in where they occur because of what is known as a ‘climate envelope’. While some birds can ‘track’ climate change by moving to where temperature suits them better, this cannot be done for species restricted to the highest altitudes as they can’t move further up. There are a number of bird species that likely are in similar trouble as the Cape Rockjumper: Ground Woodpecker and Sentinel Rock-thrush, as well as high altitude grassland specialists like the Endangered Rudd’s and Botha’s Larks and Drakensberg Rockjumper.

During 2021, BirdLife South Africa will create awareness about the Cape Rockjumper through the production of an informative poster, the development of learning resources for schools that are free to download from the BirdLife South Africa website (www.birdlife.org.za), articles in African Birdlife magazine, social media posts, presentations to interested groups, and the sale of merchandise.

The Hans Hoheisen Charitable Trust is the sponsor of Bird of the Year 2021.

Notes for the editor:
BirdLife South Africa strives to conserve birds, their habitats and biodiversity through
scientifically-based programmes, through supporting the sustainable and equitable
use of natural resources and by encouraging people to enjoy and value nature.

Information about Bird of the Year will be made available from January 2021 at:
https://www.birdlife.org.za/bird-of-the-year-2021/

The Hans Hoheisen Charitable Trust is the sponsor of Bird of the Year 2021.