The stories in the Tales from Pelican Cove series portray wild/shorebirds of FL, and beyond – birds I observed on a small cove of Sarasota Bay, surrounded by mangroves, during the years my husband, Don, and I wintered in Sarasota, FL.

Book Two – What Do You See, Mrs. Night Heron? 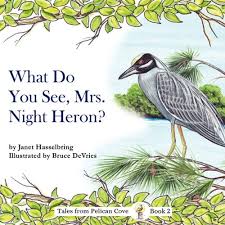 Mrs. Heron is on her nest. While she waits for her eggs to hatch, she’s entertained by the plentiful wildlife at the cove.

Like all the books in the Tales from Pelican Cove series, “What Do You See, Mrs. Night Heron?” is based on my experiences at the cove.  I’d watched the yellow-crowned night herons building their nest in a slash pine earlier that winter. One morning I watched, fascinated, as the male heron flew in with a twig in its mouth and handed it off to the female…