Elk are the most common mammals at the reserve. Photograph: Valery Yurko

Most examples of rewilding are defined as human intervention to return wildlife back into habitats where they’ve long disappeared. Thanks to the Guardian for this highly unusual one where the human population are the ones who have left – due to bizarre circumstances, to be sure – and the wildlife have slowly returned to reclaim the habitats left behind.

It’s heartening to believe that the animals may illustrate Nature’s power to heal where human’s have so severely faltered.

Rare and endangered animals have thrived in the Chernobyl disaster zone since it was evacuated in 1986, as a new wildlife tour in southern Belarus shows 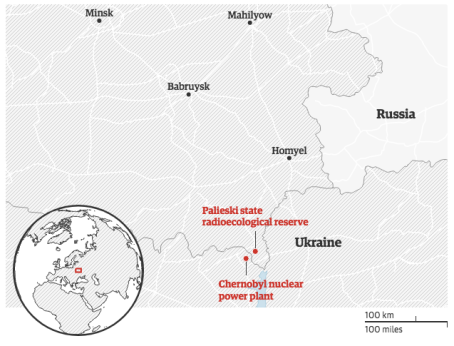 It is 5.30am in southern Belarus. A pink moon hangs over flat fields tinged with frost, and as we arrive at the checkpoint on the edge…