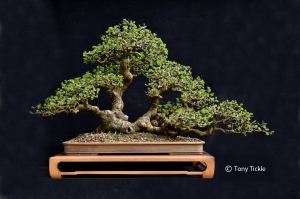 One of the challenges that face anyone creating bonsai is that they GROW not only above the soil but below, of course all trees need roots however sometimes the roots can cause problems such as oversize and out of scale to the tree, particularly with deciduous species.
I have been working this hawthorn raft over 26 years, it has been re-potted 5 times, it tends to sulk for 12 months after re-potting, but it settles down the following season.
At the end of 2015 I noticed that a major root was becoming too thick and changing the nature of the nebari of the tree. The other roots were in scale to the tree and were in sufficient number to sustain the tree if the thick root were to be removed.