I took this first picture of one of my hawthorns at the start of the season. As I studied the tree I could see that due to the distinct lack of taper in the trunk, it was not going to make a satisfying shohin image. I decided to chop it back and start again.

Unfortunately I forgot to take a picture immediately after this work was carried out but the next picture shows the progress 4 months after the cut was made. As you can see it has put on a lot of new growth and there are now enough new branches to carry out an initial wiring.

Here it is earlier today after preliminary branch selection and the application of a little wire. 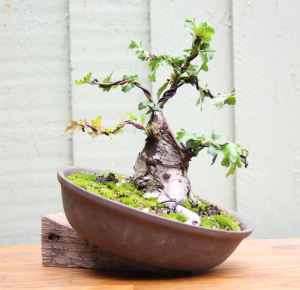 I think it is looking much better now. The next job will be to take it out of its pot next spring and remove a few thick surface roots.