My friend Gerry brought this large azalea bonsai over to my place this week to get some advice and to begin the work of shaping it into a really nice bonsai.

The first picture was taken last year on the day he acquired it from Wattston Bonsai. This is a fantastic tree with a terrific nebari but it has some issues. The movement at the top of the trunk is going in the opposite direction to the movement at the base. 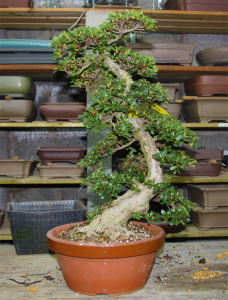 The first task was to get it firmly planted in a suitable training pot. This was done last year at the time of purchase. The next picture shows Gerry with the tree immediately after we re-potted it.

One year later, it’s firm in the pot and it’s put on a lot of new growth also. Now is the time to take action to correct the unnatural movement in the…